AN ARCHAEOLOGIST
OF THE FREE WORLDS

My lower back always ached on these dig sites, and it only got worse as I got older. A slight cough took me from the tiny haze of dust rising off my brush as I pushed away more dirt from the hole. It was easy for me to get lost in my head while excavating these sites since I could do all this in my sleep. Twenty years of digging up Old World remains had that effect on me. I felt pity for these rogue worlds that hadn’t advanced as much as the Free Worlds yet. However, there was a simplicity to these planets that I envied. Life on the relations station was fast paced, with a hustle dog-eat-dog grinding mentality that would leave anyone behind who couldn’t keep up, yet here … things were almost tranquil.

A local scientist from this planet had spent months with me on the dig site. Maddox was ambitious and eager to learn from me, in spite of his people’s real motivation, which was to keep someone at my side. I saw him in the distance running in my direction, which made me sigh.

Why did he feel it necessary to run at that moment? I wasn’t going anywhere, and he wasn’t missing out on anything. I did respect his honesty and knew his intentions were sincere, regardless of the Gliese native government and their plans. I wasn’t blind to that fact, and it seemed to be a common trait with all the rogue worlds.

“I’ll rest when I’m dead. For all we know, the next great discovery is just under this next set of rocks.”

I brushed away some dirt outlining a misshaped rock protruding from the ground under the small hole we dug a few days ago.

He got to the ledge right above me and waited impatiently as I carefully pushed my fingers under the rock and lifted it slowly.

Maddox frowned, and I felt it too—the same item again.

I brushed some dirt off the artifact and said, “Another FTL engine coil.”

“We must have a hundred of those in the lab already.”

He was correct, and it irritated me slightly. “Faster-than-light engine coils are the most common find on any dig site throughout occupied space. It’s for this reason alone that my colleagues at Eatontown University look down on me for spending all my time on rogue world excavation sites.”

I straightened out my back and groaned.

Maddox grinned. “Don’t the Free Worlds have dirt under their feet on their homeworlds? Why not go hurt your back some more there?”

He made me laugh. “We’ve already been over every square kilometer of the Free Worlds. No, the real treasures are out here. I know it. Fully functioning Titan technology will be found on a rogue world one day, maybe even here on Gliese.”

Maddox fingered his chin for a moment, then said, “Why do you think we all lost technology the way we did? It seems almost like divine intervention for so many planets to be affected—”

“And we’re no closer to understanding why. There was no greater higher power at play, believe me. Humanity fell into a pretechnological hole like this one beneath my feet at the same time across all the airbreathing worlds. I’ll do everything I can to find that answer, hurt back and all.”

Maddox laughed a little and his eyes widened. “Maybe we’ll get lucky and find a functioning Old-World ship engine.”

The Gliese government wanted a functional FTL drive like other rogue worlds at the same technology level. They all believed that with FTL ships, our relations station would accept them into the Free Worlds. That couldn’t be further from the truth, and the royals in the United Union territories could attest to that. Even the pirate worlds could travel between systems, and they weren’t any closer to gaining entry into the five walls of the Capitol Forum.

“Don’t lose heart, my boy. As my predecessor told me, ‘the next great find might be centimeters away beneath this packed soil.’”

Maddox seemed pleased, but as he looked past me, he rubbed at the back of his arm—something he did when he was uncomfortable.

I glanced back to see the soldiers watching me closely with mistrust. Their shoulders tightened, and they each brought a finger closer to the trigger of their primitive rifles after nothing more than a simple look from me. How odd.

“I’m truly sorry for how the military has treated you, Dr. Pask. Our people have a deep mistrust of outsiders.”

“I’ve spent most of my professional career on rogue worlds like this one, and believe me, their worries, although misplaced, are common. A few rogue worlds I’ve worked on required security from the relations station because the native populations were so hostile. Your planet’s technology is far less developed than that of the Free Worlds, but still, you’re more advanced than many rogue planets across occupied space. We all entered the Great Darkness around the same time, and the Free Worlds of Humanity were fortunate enough to pull themselves out faster than the rest.”

Maddox attempted a respectful smile. “The Years of Forgetting nearly killed us all … Civil Earth, Colonial Accord, Dolrinion Offensive, Human Alliance, Federate Corporation, and your relations station are nothing more to me than words—whatever my government thinks. The Free Worlds have no impact on my daily life, and no one on our planet besides yourself has seen anything outside of our system. To me, the Free Worlds are a story of fable.”

I felt both sad and envious of him at that moment. Maddox was a good person at heart, and hopefully, for his sake, he could grow old in his ignorance and never see the true horrors of humanity outside this small stellar system.

I opened my mouth to speak, but a blaring siren blew out across the landscape with deafening shrillness that sent chills down my back. It reminded me of an air-raid alert, and my heart sank into my stomach.

The soldiers behind us pushed a finger to their earpieces. Only a moment passed, then one lunged for me in the shallow hole and grabbed my shirt, tugging me up towards him.

“Unhand me, sir. What’s the meaning of this?”

Maddox tried to interject. “What are you doing?”

The soldier looked at me and said rapidly, “We need to get you both into the shelter immediately.”

“Our satellites confirm multiple fleets just appeared on both sides of the planet,” the other soldier added, grabbing at Maddox.

I felt pins and needles on my tongue. Oh no.

Relatively speaking, we were only a stone’s throw away from the demilitarized zone, and the sins of our Free Worlds had finally made it here. I jumped from the hole and Maddox stepped around it to follow.

There was a tremendous vibration in my chest from echoes of cannon fire across the distance. To the left were woods with immense tangles of root and limbs and to the right was a large hill I couldn’t see over, but past both was the same sight. Thick trails of dark grey smoke pushed up, traveling past the clouds as beams of light from defensive rocket fire made their feeble attempt to defend this world.

We had to cover our eyes even with the clouds overhead because the explosive flashes were so bright. My hair blew back. We made it up the hill—the shelter entrance was not far off. One of the soldiers pointed ahead.

Sentinels of the Offensive wouldn’t care that I was a Free Worlds citizen from the relations station. They’d treat me the same as these natives. My hands shook at that thought because Dolrinions were ruthless. Maddox pulled on my arm, and I turned to gaze behind us.

His voice shrieked with fear. “The Free Worlds have come.”

Federate Corporation hoppers dropped rapidly. Rippling air that seemed like waves pushed off the sides of those ships. Combat hard drops from two Free Worlds militaries, and we were caught in the middle. I felt like a slice of meat between two pieces of bread. Not a great outcome for the meat.

It seemed those words that meant very little to Maddox were now a grim reality that he wouldn’t be able to escape. Nor I, for that matter. I felt disappointment at that moment. Political double-crossing inside the forum was the cause of this, beyond any question in my mind. This was our humanity at its best, and millions on Gliese would die because of it. 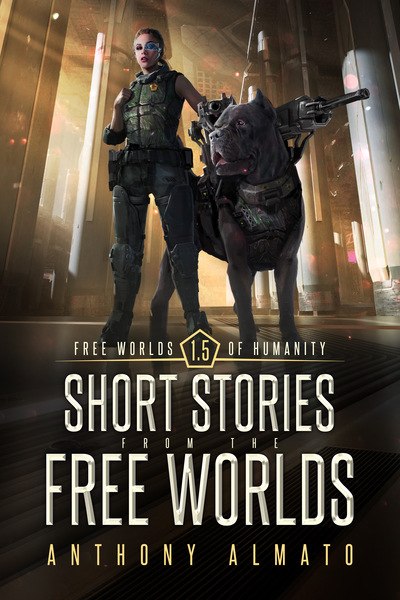